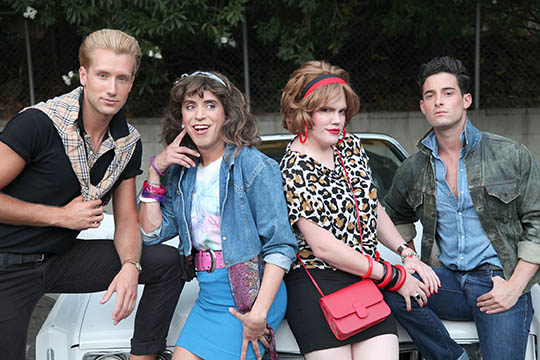 (US; 2013; 100 min.)
Director: Charlie Vaughn
John Hughes meets John Waters in this hilarious gender bending comedy. The film casts two talent young men — Brandon Alexander III (who wrote the script) and Dudley Beene don wigs and leg warmers to transform themselves into a pair of teen girls trying to be totally rad in the 1980s.

Cassie and Maggie are the most awkward girls in high school and are repeatedly the butt of jokes by two popular girls (who are both named Heather) and their hot boyfriends. So, our heroines decide to take matters in their own hands by aiming for the top prize at an upcoming talent show.

Among the fun cast is Cassandra Peterson (aka Elvira Mistress of the Dark), Jack Plotnick (the 2003 film “Girls Will Be Girls”) and comedic actress Judy Tenuta, who first came to prominence as a stand-up comedian in the 1980s.