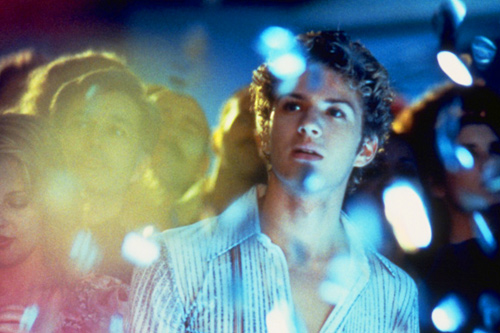 After several years of effort, Reel Q is proud to present the Pittsburgh debut of this daring film, just as the director originally intended.

First released in 1998, 54 tells the story of the quintessential 1970s night club, Studio 54, and its colorful co-founder Steve Rubell (Mike Myers) as seen through one of its bartenders (Ryan Philippe). For its initial run, the studio insisted on severe edits that, among other things, removed a bisexual love triangle and downplayed the gay undertones and illicit drug content.

The director’s cut is a very different and much improved movie with 36 minutes of additional footage. 54 still centers on ambitious and sexually curious Jersey teen Shane (Philippe) who lands a coveted job at the hot club. There he enters a world of intense hedonism that includes drugs, casual sex, shallow celebrity, and a complex three-way relationship with new pal Greg (Breckin Meyer) and his wife Anita (Salma Hayek).

54 includes model/actress Sela Ward, the film’s only cast member to have actually been to Studio 54 during its heyday.

Join us after the film for a Disco-themed party at Arthur Murray Dance Center – 136 6th St. There will be snacks, alcoholic beverages, disco music, and dance and costume contests! Get ready to do The Hustle!