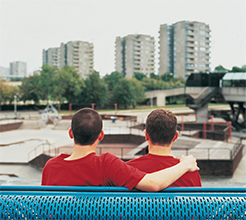 In 1996, The Birdcage delivered an outlandish version of gay life to American filmgoers, while a British comedy slipped quietly into US theaters. It dealt with the attraction between two young working-class lads in a believable way, and even though it ended somewhat idealistically movie-goers left theaters smiling.

To commemorate its 20th anniversary, Reel Q revisits Beautiful Thing to find out how this gritty coming-of-age tale holds up today.

Jamie (Glen Berry) hates sports but loves a jock, avid sports fan Ste (Scott Neal), who lives in the same housing development. Bullied by both his drunken father and his older brother, Ste often escapes next door, and Jamie’s mom Sandra (Linda Henry), a tough barmaid with a soft spot for the abused boy, often lets him stay over night. One night the boys share more than just a bed, and their lives are never the same.

The leads are believable as teens who explore their budding love in the environment of a bleak London housing project rife with prejudice and homophobia. Affectionate in private, the two must remain on guard in public. Henry is excellent as the loving but meddling mom, especially when she confronts the truth about her son. Their neighbor Leah (Tameka Empson) gets laughs as a teen with an obsession for Mama Cass, which adds a lively soundtrack of classics by The Mamas and the Papas.

Can a relationship between two gay teens survive the obstacles of such a depressing urban setting? That may be a darker subtext than the film intends, but in the end Beautiful Thing is a tender romantic comedy with lots of heart. 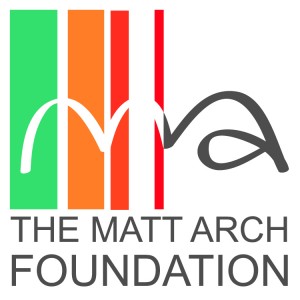