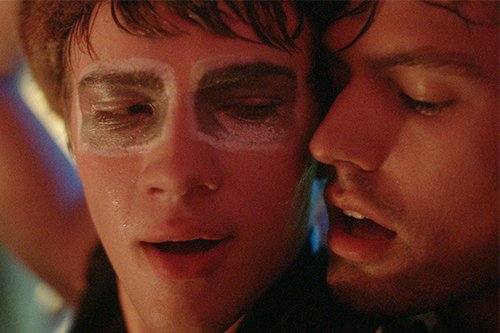 A convincing coming-of-age story, Closet Monster blends realism, eroticism, fantasy, and humor to create a crowd-pleasing film with many awards to its credit.

Oscar (Connor Jessup of last season’s television drama American Crime) is a gay teen who has yet to deal with his closeted fears, as well as the homophobia of ’90s small town life in Canada. After witnessing a brutal gay bashing as a kid, Oscar withdraws into an artistic world, admitting only a few. But when Wilder, an attractive co-worker (Aliocha Schneider), seems to offer more than friendship, Oscar must decide how to be true to himself in a sexually charged situation.

Closet Monster transcends many films about first love because of its acting, directing, camerawork, and realistic screenplay. A best supporting actor award should go to Oscar’s hamster, Buffy (voiced by Isabella Rossellini).

For a film that could have easily been too quirky, Closet Monster is engaging and often surprising. Closet Monster was the winner of Best Feature at both Toronto’s LGBT and International festivals, as well as queer film festivals in San Diego, Melbourne, and Miami.