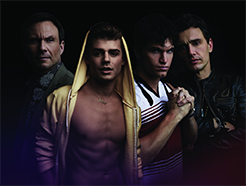 King Cobra is certainly one of a kind. Detailing the real-life 2007 homicide of hardcore producer Bryan Kocis (Christian Slater) Kocis was killed by two men, known in the film as Harlow (Keegan Allen) and Joe (James Franco), who covet the producer’s most prized possession: Brent Corrigan.

Played by former Disney star Garrett Clayton, 17-year-old Corrigan (aka Sean Lockhart) dreams of being a filmmaker. To move out of his mother’s home, however, he settles for a spot on Kocis’ couch, quickly becoming the gay porn industry’s newest “It Boy.” Corrigan later clashes with Kocis, a controlling manipulator who pays him much less than the young star knows he deserves. Given the fact that Kocis just bought a Maserati, Corrigan knows his boss is good for it. When Corrigan finally works up the courage to quit Cobra, no one in the “industry” will take him. That is, until the Viper Boyz strike.