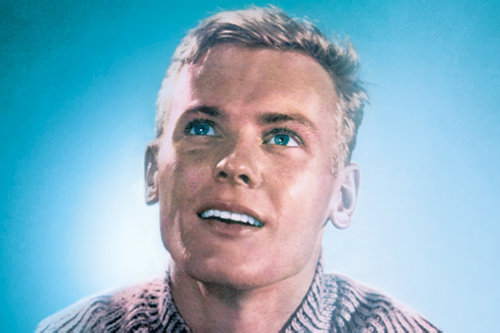 One of the most popular movie sex symbols of the 1950s and 1960s shares his amazing story in this engaging and inspiring documentary.

Born as Arthur Andrew Kleim in 1931 New York to a Jewish immigrant and his German-Catholic wife, his early life was marred by the elder Kleim’s abuse. After their divorce, Tab’s mother took him and his brother to start a new life in California under a new name: Hunter. He became one of Hollywood’s most popular romantic actors at the age of 24 with his role in the film Battle Cry. But beneath the buff, masculine façade and unknown to the millions of teen girls who marveled at his chiseled chest, was a gay man looking for love and his own place in this world.

The film recounts Tab’s professional and personal challenges through interviews with Tab and his famous friends that include filmmaker John Waters, actors Debbie Reynolds, Robert Wagner, Portia de Rossi and actor/director Clint Eastwood. These challenges include his complicated relationship with actor Anthony Perkins (1932-1992), best known for starring in the classic 1960 film Psycho.