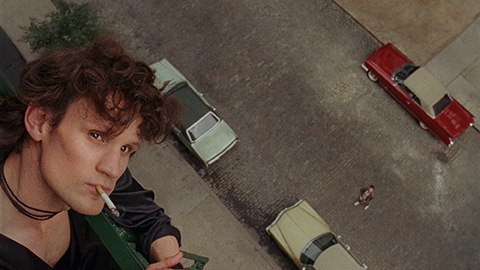 Strip away the drugs, the leather, the M4M sex, and what remains are the photographs: Robert Mapplethrope’s stunningly beautiful homoerotic art, which is startling even today.

The iconic photographer is the subject of a revealing biopic that begins with his adolescent years in Queens, New York in a repressive Catholic household, which is controlled by a critical father who ridicules his photography. The film traces his tentative relationship with future punk rocker Patti Smith (Marianne Rendon), and then moves on to the queer underground S&M scene as well as the upscale galleries of the 70s and 80s in New York City.

As Mapplethorpe’s artistic star rises, his personal life spirals out of control through unlimited drugs and unprotected sex over two decades, ending with his death at 42 from an AIDS-related illness.

Matt Smith (Dr. Who, The Crown) plays the queer photographer as an insatiable sex rebel who experiments with his photography as well as his sexuality. After his breakup with Patti Smith he takes up with the respected art collector Sam Wagstaff (Johan Benjamin Hickey) who mentors him, and after that breakup he fulfills his lust for hung, black athletic — and possibly straight — men, which influences his art as well as his life.

Made with the support of The Robert Mapplethorpe Foundation, which granted the director access to archival material, Mapplethorpe features the photographer’s original art, including the infamous Man in Polyester Suit.

The view of Mapplethorpe is often critical — he’s narcissistic, abusive, an opportunist — and yet in the end, nearly 30 years later, his images endure: gorgeous works of art by a true creative genius.