Episode 4: Where Is My Refuge follows the story of Nina. After growing up misunderstood in India, Nina fell in love with another trans woman in the Bay. Together, they built a suicide hotline by road-triping across small town America and connecting with thousands of trans people. Her life changed in an instant when Arizona authorities stopped her for being brown, insisting that her marriage was invalid. In the month since her detention, Nina’s been caught in limbo, afraid she’ll be forced to leave the country where she’s saved so many lives. 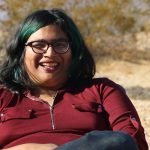 Nina Chaubal grew up in Mumbai, India. In 2015, she left her job at Google to co- found the Trans Lifeline, the first ever crisis hotline for transgender people. In just three years, Trans Lifeline trained 700 transgender volunteers who answered 40,000 calls. Now Nina is launching an intentional community, art space, and small business incubator in the Mojave Desert. She is helping foster numerous trans-owned small businesses.